His body was located in 1927, and was interred at its present location, he was found close to his VC action. 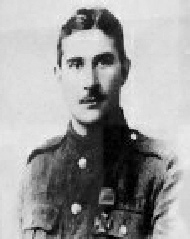