He survived the war, but disappeared after a canoeing accident in 1922, on Lac Seul, Ontario, his body never to be found 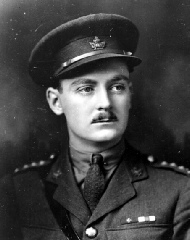