His original VC was stolen from his Toronto home and never recovered. A replacement was purchased in August 1935 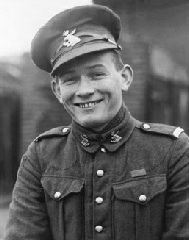