On the Headstone of Captain Jeffries VC is the lines of a poem by Theodore O'Hara, Bivouac of the Dead.

Their silent tents are spread,

And Glory guards, with solemn round,

The Bivouac of the dead 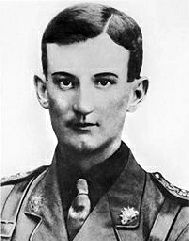