One of three men to have lived on Pine Street (later named Valour Road), Winnipeg, Manitoba, Canada to be awarded the Victoria Cross 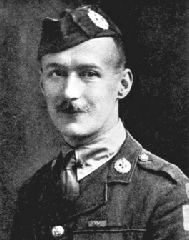