He emigrated to Canada from Ireland, and worked in the logging industry before and after the war 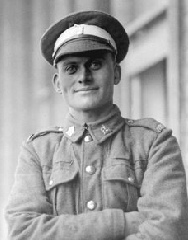