His headstone shows name as W.S. Kenealy and shows rank as Lance-Sergeant, there is no record of this promotion 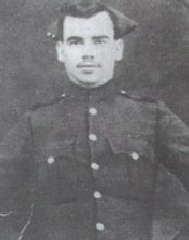