He earned the nickname Walking Stick Willis, after featuring in a painting of the Gallipoli landing, with a walking stick in the air and encouraging his men 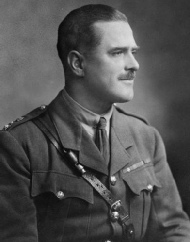