Joining the LNWR in 1914, he spent all his working life on the railway, retiring in 1960, only the war interrupting his service 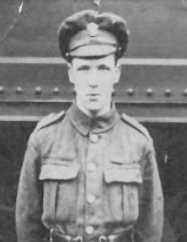