He died of natural causes whilst serving with 1st Battalion, City of Sydney's Own Regiment during the Second World War 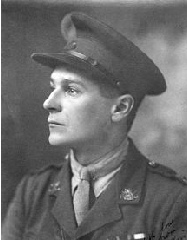