A very tragic end, he suffered a seizure after his bride was hit by a truck on honeymoon in Teignmouth, he went into a coma and never recovered 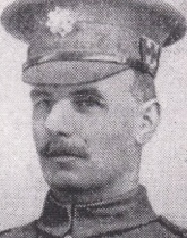