His original Victoria Cross was destroyed, when his house was  bombed in Plymouth in the Second World War, he did get a replacement 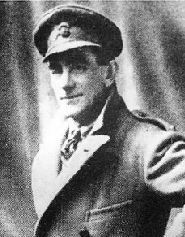