When he first joined up he was under age, but this was discovered and he was discharged,  but he didn't give up and rejoined in late 1916 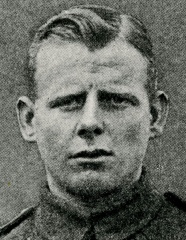