Most decorated Welsh NCO of all time, and first man to be be decorated with four decorations by King George V on the same day 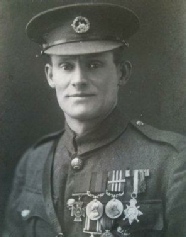