Place Of Death   At his home, Hastings, Victoria, Australia

He served in World War 2 in the Royal Australian Engineers 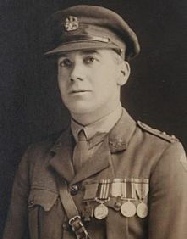