He wrote a book about his time in the war, titled Hells Bells and Mademoiselles 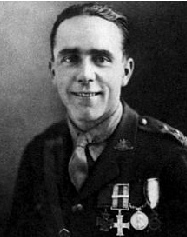