Place Of Death   At his home, 33 Nelson Road, Arnold, near Nottingham, Nottinghamshire, England

He became a publican after the war, running a pub in his home town 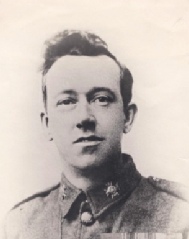