Eric Dougall was killed a day after his 32nd birthday, and 4 days after his VC action. 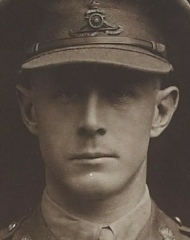