He emigrated to Saskatchewan, Canada in 1903 and it was here he enlisted into Lord Stathcona's Horse at the outbreak of war 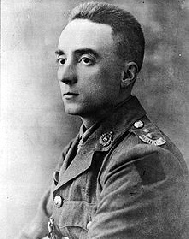