A career soldier,he stayed in the army after the war, and served in Egypt, Sudan, China, Germany, India, Iraq, Northern Ireland retiring from the army in 1939 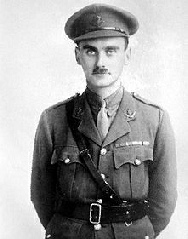