At the start of the war, he joined the Canadians as he was working in the banking industry in Canada at the time. 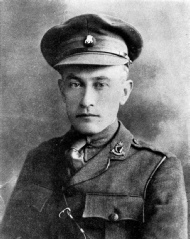