He almost died from stomach wounds received in his VC action, but recovered and lived for a further 36 years 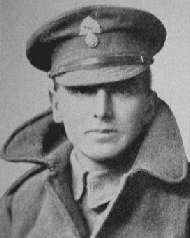