He was the second VC to win his award commanding the same submarine, the E14, the other was 609 Edward Boyle. 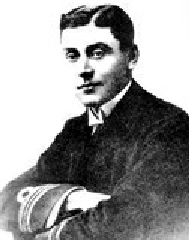