The village of Ain Karim were his VC action took place, was the traditional birthplace of John the Baptist. 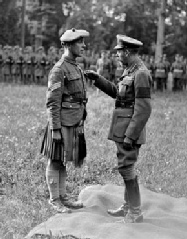