Although attending the University of North Wales and Edinburgh University, he dropped out of education and joined the army in South Africa in 1902 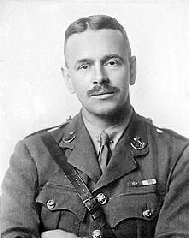