Working in the Mines, he could have avoided the Military, but he joined the Irish Guards 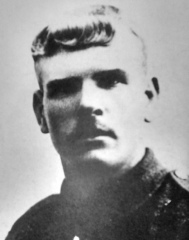