He served on 3 Q-Ships that all were involved in VC Actions, he gaining the VC on the third HMS Dunraven 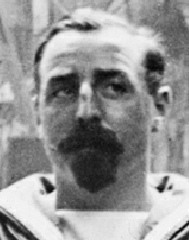