Place Of Death   At his home, Edinburgh, Scotland

After the war he became a very successful Ship Salvager 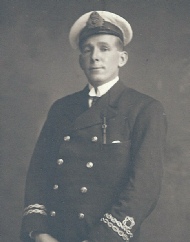