His Name is on a Memorial Sundial, at Lossiemouth Golf Course, were he used to Caddie as a youngster 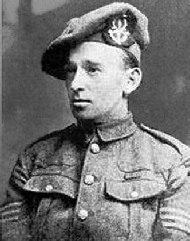