With the Sale of Harold Ackroyds medals, by his Family, a Medical Scholarship was set up at Gonville & Caius College, Cambridge, Harold's old College 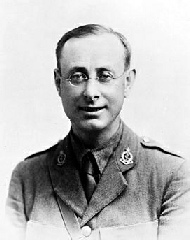