He played himself in the 1942 James Cagney movie, 'Captains of the Clouds' 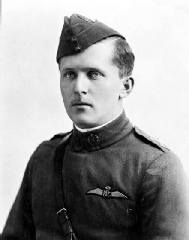