He was accidentally killed during Mortar Practice, while serving with the Home Guard. A Memorial stands were he died, on Blubberhouses Moor 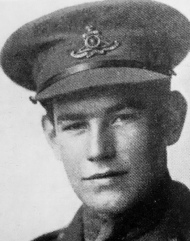