Born in Sri Lanka, his Father was a Tea Planter, he himself was a Tea Merchant before the war 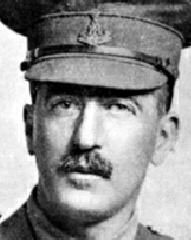