Place Of Death   At his home, 'The Court House', South Petherton, Somerset, England

And officiated at the wedding of (525) Sidney Frank Godley VC 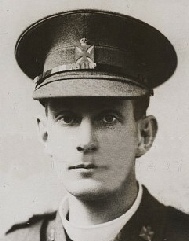