P  Plaque set in a stone, (was on wall of chapel) in Philips Park Cemetery, Manchester, Gtr Manchester

A headstone was erected by The Manchester Regiment Old Comrades Association 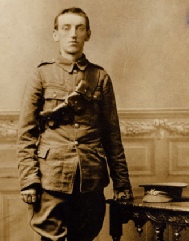