He was a regular army officer before the war having served in the Sudan, India, China, Malta and South Africa. He retired in 1912 but came out of retirement 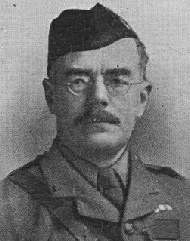