Being wounded in his VC action, he was mortally wounded when his stretcher was hit by British shellfire 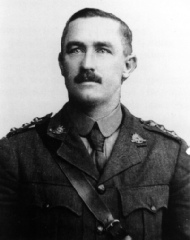