VC Presented   Registered post to his father, Alfred Edward Burton on the 12 January 1916 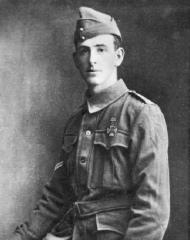