He was a professional footballer with Glasgow Celtic, although didn't ever play for the first team 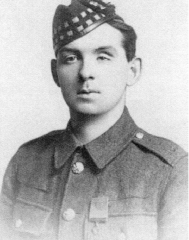