He died from being hit by a rescue boat, after the ship he was on was torpedoed, in the Mediterranean 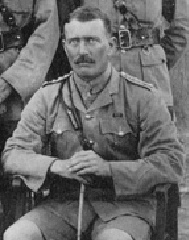