VC Presented   Registered post to his parents at 576 Lansdown Road, Westmount, Canada on the 5 August 1915 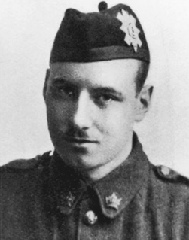