Attended the unveiling by HRH the Prince of Wales of the tomb of the Belgian Unknown Warrior, Brussels, April 1923 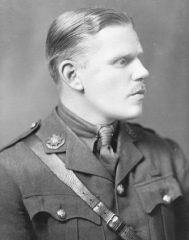