He volunteered and succeeded in taking and planting a flagstaff on a mound, to act as an artillery marker to destroy a hidden gun battery, whilst under heavy fire. 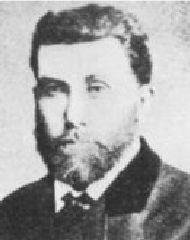