The 55th Regiment amalgamated with the Border Regiment in 1881

He was awarded for three occasions; 29th March 1855 for driving off the Russian who were destroying some newly completed positions. 7th June 1855 being first out of the trench, leading by example, at a position known as the quarries. 4th August 1855, aain by example, digging defences under heavy fire at the quarries. 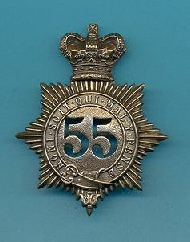