He carried out his VC action with another, but he later died in the war, thus at the time no posthumous VC’s were awarded

He volunteered to go into a gun embrasure to carry out repairs caused by Russian guns staying put until the repairs were made. All the time under very heavy fire.

Thank you to Michael, Kate & Ruth Pagan for photos in Glasgow 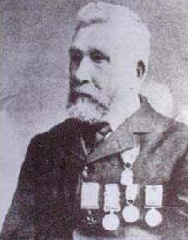