He was one of nine ex pupils of the Edinburgh Academy, (Academicals) to win the Victoria Cross 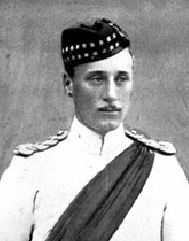