A plaque used to exist at St Mary at Lambeth Church, the church is now a garden museum next to Lambeth Palace. It’s not known were the plaque has gone 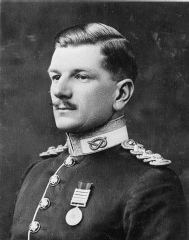