He was awarded the Sword of Honour at Royal Military Academy, Sandhurst 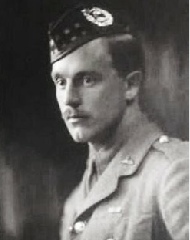