A new headstone was erected in 1996, his name was not on the original stone which had subsided 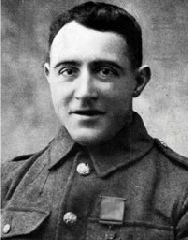