Wounded during his VC action, he was captured at the field hospital, but escaped by horse a few days later 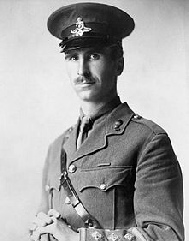 Thank you to Les McKeague for photo of Cahans Blue Plaque